California can bring up many different ideas and visions, some love it, some not so much but either way it’s hard to deny that California is a unique state with progressive and innovative ideas. Not to mention the varied beauty the state has to offer from Southern Cali on the Mexican border to the mountains of Northern Cali.  I was actually born in Stockton California but my parents moved to Tennessee when I was so young that I didn’t remember anything at all about being there.  The first chance I had to return to Cali was in 1995.  I had went for several reasons, one my brother was living in Mammoth Lakes, two I was going with a couple of friends that I worked with and one of them was getting married soon to a man who lived in Alameda, an island just across the bay bridge from Oakland and San Francisco, and three I wanted to see where I was born.

We flew into San Francisco where my friends fiance picked us up at the airport.  He lived out on the island of Alameda so we drove across the iconic Golden Gate Bridge to our

destination.  It seems much bigger in person than in pictures but the feeling of driving across
the bridge was the same…fantastic!  I really enjoyed staying on the island of Alameda, it had a lot of great shopping, restaurants, and easy walking to everything that you need or want. After checking out the island for a couple of days we rented a car so we could branch out. First stop San Francisco proper.  I absolutely loved it here there was so much to do and see, the museums, art galleries, parks, the sites were incredible and for such a large city the people were really nice and very artsy.

One interesting site is the most crooked road, Lombard Street. You can actually drive down it although in looking at it you would think it is a walking or biking road only.  All along Lombard Street are beautifully manicured homes with some of the most beautiful plants from top to bottom. So be sure to seek out this quirky street on your trip to San Francisco.  Another interesting new thing we discovered on the streets was a stainless steel round pay toilet.  Really it was quite fascinating and looked like something on a spaceship.  The city had worked a deal with a French company to install quite a few throughout the city starting in 1995. We paid to go inside (about 5 of us) to check this out.  It actually would clean itself and was pretty neat to watch.  The downside is I have read some articles recently that have talked about the problems that these pay toilets have caused.  Mainly drug addicts, prostitution, and homeless people even the occasional overdose so if you check them out be very cautious and never use these at night.

Don’t pass up the chance to visit Fisherman’s Wharf! This place is alive with life, seafood, and cultural diversity. I personally do not eat seafood but there is plenty of different

types of food in this area.  There are also all kinds of special events, theaters, museums, attractions for kids just an all around great place to spend a weekend by yourself or with family. Pier 39 is a great place to watch sea life bask in the sun so be sure to take the family down on the pier to watch.  Pier 39 is also the place where many of the tour excursions meet whether it’s touring the city, museums, food tours, art and architecture tours, famous people’s homes or the infamous Alcatraz prison island. You can find many different types of interest here to satisfy yourself or the whole family.

Speaking of tours of Alcatraz prison, we decided to take this tour because how often do you get the chance to see inside of such an infamous place without suffering the consequences of being sent there.  Of course Alcatraz has long been empty of inmates but some very famous residents have lived there in the past including Al ‘Scarface’ Capone, Robert ‘The Birdman of Alcartraz’ Stroud, George ‘Machine Gun’ Kelly, James

‘Whitey’ Bulger, Mickey Cohen, and Alvin ‘Creepy Karpis’ Karpowicz of the famous Barker gang during the 1930’s he was also labeled as ‘public enemy no. 1’ by the FBI. Another inmate from 1942-1952 was Jim Quillen who on this particular day that we visited the island was actually there in person signing his new book about being an inmate at Alcatraz. Of course I could not pass up the opportunity to sit down with Mr. Quillen and ask him a few questions like ‘what did you do?’ he said ‘robbery, kidnapping, you know’ haha then he gave me a big ol’ squeeze while my friend took our picture.  My friend would later visit the gift shop while I was still talking with Mr. Quillen and get his book for me knowing how I love such things.  Mr. Quillen would die just a few years later after our meeting on Alcatraz island in 1998.

Alcatraz island was such a great tour overall from the extremely rough ride on the ferry over to the island where I could just imagine how isolated the inmates and the guards must have felt there.  While walking around on the island that day looking into the cells of former infamous residents that once paced back and forth in such small confined areas, it felt as though you could feel them there and feel their loneliness, their anger, their desperation, and their hopes just slipping away. I don’t know what it might have felt like during the days of operation but now it just felt so cold, dark, and helpless there.  Those that were unfortunate enough to be sent to Alcatraz were usually those type of inmates that were more aggressive, dangerous, or disruptive in the prisons they came from. Alcatraz has been described as a hell that unruly inmates were sent to with very few privileges, bad treatment, beatings and even with the first warden there was no talking amongst inmates hardly ever or they were sent to the dungeon in very harsh conditions. They were not allowed to see newspapers or magazines because they were not allowed to know what was going on in the world.

Life was tough both physically and mentally difficult on these inmates. However there was much beauty on the island despite the harsh conditions of the inmates. Alcatraz island was discovered by a Spanish explorer in 1775 named Juan Manuel de Ayala (1745-97) who called it La Isla de los Alcatraces, or Island of the Pelicans, due to the large population of sea birds. There is also some very beautiful plants and flowers that grow on the island giving it a nice contrast against the rugged cliffs.

Next it was time to drive out to visit with my brother who was living in Mammoth Lakes California but on the way there you had to drive through Yosemite National Park to get there so what a nice surprise.  We took this trip the end of June first of July and my brother said the mountain pass had just re-opened from all the snow they had. In July really?? I was quite surprised that the snow lingered so long.  The drive getting to Yosemite was just as beautiful with the rolling hills covered with wind mills that seemed to just blend into the California sunset in the evenings then gradually the hills became mountains with snow caps glistening in the sun. If you do plan a trip to Yosemite be sure to set aside several days because you cannot see all the beauty the park has to offer in one day.

Upon entering the park at Yosemite there was a $20 fee which the park ranger told us that we had a total of 7 days or we would be charged again.  I explained to him that we

were just traveling through to Mammoth Lakes to visit my brother but he wasn’t interested in my family reunion and told me if we were not back through in 7 days we would still be charged another $20 fee. Not the friendliest of park rangers but some just can’t wear the uniform. However on the drive through who could not stop and enjoy all the beauty of the park, it was fantastic, mesmerizing mountains, cliffs, waterfalls, and wildlife. Here is a picture of one of the lakes inside the park and yes this is the middle of summer with snow and even some ice on the lake remaining from the long winter.  Scenes like this were abundant within the park and driving through there you felt as though the nature around you would swallow you up it was everywhere.

I had heard of many stories of Yosemite National Park how it was helped to be preserved by Teddy Roosevelt after he fell under it’s spell during a camping trip with John Muir. The cliffs where climbers risked their lives just to reach the top because they can, the ancient Giant Sequoias that you could drive a whole vehicle through one of them, the abundance of wildlife roaming free.  This place looked like a painted picture that I had seen somewhere and somehow I ended up inside of it.  It was absolutely breathtaking.  The Sequoia groves were incredible as well. You read about how old and large they are but until you see them in person it’s difficult to imagine just how impressive they truly can be.

Next stop was Mammoth Lakes where my brother was living. This is a beautiful area of California if you ever get the chance to go there. It’s also a famous ski resort for the rich and famous. My brother told me many stories of seeing celebrities at the ski resort or in town at the local restaurants and bars.  There is also a lot of beautiful sites in the area for hiking, canoeing, several natural hot springs are also nearby. There is a natural geologic phenomenon close by as well called The Devil’s Post Pile National Monument that is very interesting. These are caused by volcanic activity and this is one of the best examples of this phenomenon.  I have included the website below so you can read more about this geologic wonder and the park area.

Another fun activity around the Mammoth Lakes area are the dude ranches and pack outfits.  The one we visited was Mammoth Lakes Pack Outfit. It has been in operation since 1915 and has some great packages for riding horses and mules to discover the beautiful region. Check out their website below for pricing. My brother’s roommate was working at this ranch which is why we chose this one but there are many to choose from in the area. 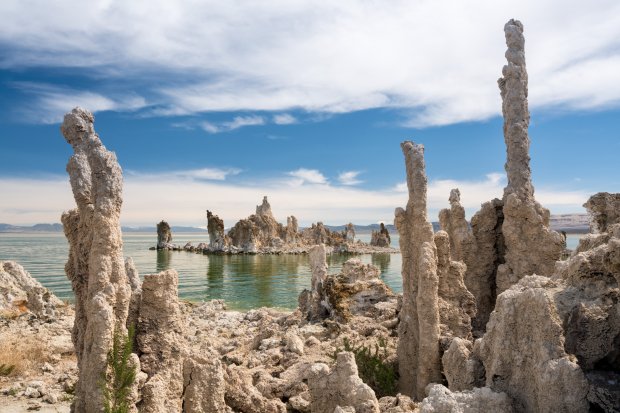 Mono Lake is another very interesting geologic wonder that you shouldn’t miss while visiting California.  This particular lake is a saline soda lake that was formed at least 760,000 years ago. Just looking out over the lake and the formations, you would think you’re on another planet. Be sure to stick around at sunset, that is when you will get the best pictures of this lake that will truly look like another world altogether.  This is a great lake to explore by canoe or kayak so you can appreciate all it has to offer. Mono Lake is actually called Mono Lake Tufa State Natural Reserve.